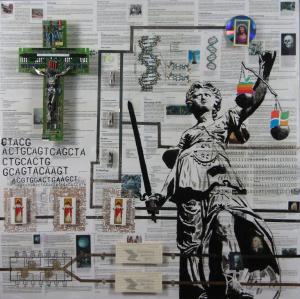 Artwork Title: Technology Will Save Us All, by Michael Farmer, Mixed Media, 48 inches by 48 inches

I saw computing go from a new convenience to a all powerful force in everyday life. This art series explores my perceptions of the spiritual and economic impact the digital revolution has on humanity.”
— Michael Farmer

PHOENIX, ARIZONA, UNITED STATES, May 12, 2022 /EINPresswire.com/ -- A solo show of new artworks by Arizona artist Michael Farmer is set to open on the evening of June 3rd at the Alwun House in downtown Phoenix. The show, titled, “Technology Will Save Us All,” will consist of over 30 artworks created over the last three years by the artist. The art consists of collage, painting, and ready-made objects on panel that range in size from 8 inches by 10 inches up to 4 feet by 4 feet. At the heart of the exhibition is the relationship of society to technology. With a heavy influence from religious art, each artwork explores a different theme of the digital age. The art uses visual elements from Christianity, Judaism, Buddhism, and Taoism to explore the interplay of spirituality and our everyday computer driven devices.

“Technology Will Save Us All” is Michael Farmer's first major solo exhibition. It will open on June 3rd and run until July 29th at the Alwun House at 1204 E. Roosevelt St. in Phoenix, Arizona. The Alwun House is one of Arizona's longest continuously operated non-profit art spaces and has won a number of awards through the years for representing its diverse community. The artist has exhibited in several of Alwun House's group shows and was accepted as the extended summer exhibition for the venue.

The artist starts with a background collage of printed Wikipedia articles that relate to the theme of the work. To that he adds acrylic paint for a focal point of the work. Then, in a carefully conceived schematic, like a circuit diagram, sculptural elements, such as vacuum tubes and diskettes, are added. The motif of each art work springs from the artist's personal life and connects to larger cultural concerns. As a child the artist was surrounded and influenced by his mathematician father’s obsession with computers, science, and logic. Over his lifetime the artist saw computing move from a new convenience to a powerful force in everyday life and these works deal with the rise of computing in the modern age.

Michael Farmer graduated from the University of Arizona in film and video production. He has been a primarily self-taught visual artist for over 25 years. He has exhibited in several venues in Arizona including The Herberger Theater, FOUND:RE Art Hotel, and The Phoenix Art Museum, as well as galleries in California. He has won multiple awards through Mesa Community College Gallery. He is in private collections in Phoenix, Austin, Connecticut, New York, and Ireland. His art has traditionally been surrealist and abstract in nature. He lives in Mesa, Arizona where he creates in his home studio.