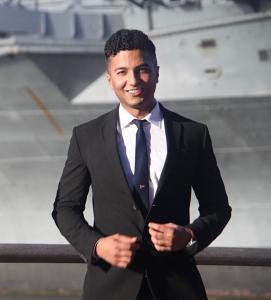 Asad Khaqan paid off the rents of more than 20 families in Bucksport, Maine who were unable to cover their living expenses

Helping those 20 families is something that was normal and natural to me and just made sense. This is our responsibility as humans.”
— Asad Khaqan

BUCKSPORT, MAINE, UNITED STATES, May 7, 2022 /EINPresswire.com/ — Over the past couple of years, too many stories about families losing it all have been emblazoned across the nightly news shows and daily newspapers. These stories are all too familiar to so many Americans trying to stay afloat both during the pandemic and as the world enters a post-pandemic world.

The struggle to meet basic living expenses has crept into cities large and small across the nation. Even Bucksport, Maine, with a population of approximately 5,000 citizens, hasn’t been immune to the economic struggles. Twenty Bucksport families who had been living full time in the Spring Fountain Motel throughout the pandemic know these challenges all too well, with lockdowns and economic slowdowns resulting in late payments and the threat of legal ramifications.

The state of Maine has long faced a housing crisis. Similar to other areas across the country, COVID exacerbated these issues. As families could no longer afford their homes or could not find other affordable living options, some of Bucksport’s residents turned to the Spring Fountain Motel as their full-time residence. But even living in a more affordable alternative to single-family housing or an apartment proved difficult for many of these families.

Twenty families living in the Spring Fountain Motel found themselves months behind on rent. Motel management determined they would pursue legal avenues outlined under Maine’s laws to collect rent or pursue eviction. However, in opposition to the actions motel management sought, motel owner Asad Khaqan decided to take a more generous approach: forgive the past due rents of the 20 families calling Spring Fountain Motel home.

While the financial burden was a heavy one to bear for Khaqan, he knew that the moral burden would have been much heavier had management moved forward with taking legal actions against the residents in their greatest time of need.

Khaqan is a tristate hospitality entrepreneur known for his philanthropy, so for him, helping the families of Spring Fountain Motel came naturally.

“Helping those 20 families is something that was normal and natural to me and just made sense,” said Khaqan. “This is our responsibility as humans. I was able to help them in a time of need, and I am happy I was able to do it.”

The initial plan was to cover two months’ rent; however, Khaqan soon saw a much greater need extending beyond that generous offer.

“When Covid hit so unpredictably, I decided to cover their rent for two months,” explained Khaqan. “Unfortunately, some families couldn’t pay their rent even after that, so I forgave their balances. As an owner, it is one of my core responsibilities to look after them, and I did my best to take care of them as long as I could.”

Khaqan has received an overwhelming amount of appreciation from the families he has helped and the public for his kind gesture. While the recognition is a nice gesture, he notes that his only desire was to help the people living in his motel. But if anything else comes of his generous gesture, he hopes that it inspires others, especially other hotel owners, to follow suit and help those who may be in need as well.

But not all of the attention has been positive. Opening its doors to long-term guests exposed the hotel to public scrutiny. Some residents and the local government viewed the economically disadvantaged occupants as a burden on the town’s services. So instead of applauding Khaqan’s efforts, the town notified him they would take action against the families living in the motel. The town management claimed the motel was not safe to be inhabited, referring to a previous violation. They pursued the town council and ousted all of the tenants residing in the Spring Fountain Motel with cause due to a safety code violation.

Despite Khaqan’s efforts to fight the government, the town ultimately prevailed, and the families benefiting from Khaqan’s generosity were forced out and had to seek other living arrangements. Most were offered access to a local homeless shelter, but residents preferred to go elsewhere as the shelter turned out to be an inferior alternative to hotel housing. Some residents lived at motel for over a decade, and many worked at this eight-acre property, making it a small community.

While the story of the families of the Spring Fountain Motel didn’t ultimately work out in their favor, Khaqan still hopes that the story of his generosity will inspire others to do what’s right since COVID ramifications are far from over for our country. With so many people facing hard times right now, he believes we should all band together and do what’s right. With a bit more kindness, including from local governments and business owners, Khaqan believes we can start to rebuild the parts of society that have been crumbling, even if those kind acts come at a cost.