City of Columbus, Mississippi Pick It Up! Possum Town Logo 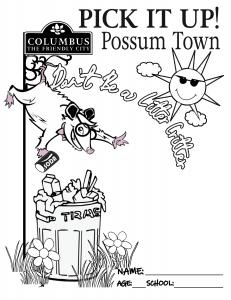 One of the most important goals of our Pick It UP! Possum Town litter abatement initiative is to get Columbus’ youth involved and knowledgeable about how trash and pollution affect us all.”
— Melissa Parsons, Committee Chair of Pick It UP! Possum Town
COLUMBUS, MISSISSIPPI, USA, May 4, 2022 /EINPresswire.com/ -- The City of Columbus, Mississippi, announces its Color It Up! judged coloring contest where children three to 11-years old draw themselves with Mayor Possum (Columbus’ Litter Critter) at this year’s Market Street Festival, Saturday, May 7th in downtown Columbus.

“One of the most important goals of our Pick It UP! Possum Town litter abatement initiative is to get Columbus’ youth involved and knowledgeable about how trash and pollution affect us all,” says Melissa Parsons, committee chair of Pick It Up! Possum Town.

“Children love coloring, and linking this creative activity to these critical lifelong issues will hopefully lead to a greater understanding of the benefits of a cleaner, more presentable Columbus and future community participation.”

The quintessential mission of the Pick It Up! Possum Town committee is to bring about and sustain a cleaner Columbus. Its efforts are not limited to picking-up trash but to keeping Columbus cleaner, more presentable, healthful, and safer for residents, visitors, and travelers for generations to come.

Founded in 1821, the historical “Friendly City” of Columbus resides upon the banks of the Tombigbee River on the Eastern border of Mississippi and serves as the county seat of Lowndes County.

Before its incorporation, the Indian trading-post settlement that became Columbus was called “Possum Town” by the Chickasaw and Choctaw Native Americans. Columbus’ historical significance began in 1540 when Spanish explorer and conquistador Hernando de Soto described its location during his quest to find El Dorado, the lost city of gold.

The city is further noteworthy for being home to legendary playwright Tennessee Williams, its designation as a Mississippi Hills National Heritage Area, plus three National Register recognized historic districts, making Columbus one of 12 of its distinctive destinations in the US. And Columbus’ formal “Decoration Day” remembrance of fallen Civil War soldiers led to our National Memorial Day holiday.

Melissa Parsons
Pick It Up! Possum Town
+1 662-435-0070
maparsonslittercampaign@gmail.com
Visit us on social media:
Facebook
Other