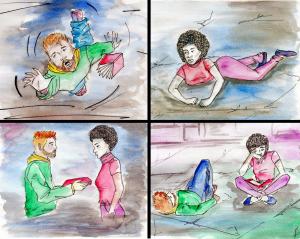 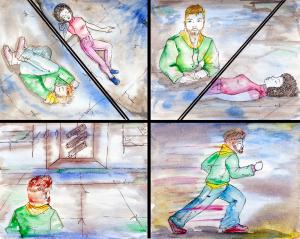 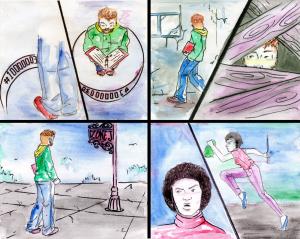 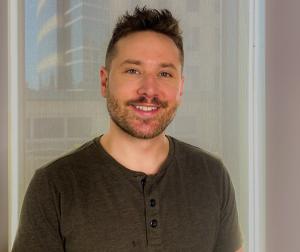 “Regarding the diversity of our cast and crew, all I can say is that it feels good to be working with my friends and neighbors. The Bay Area, and Oakland especially, is very diverse in all aspects.”
— Evan Shwartz
OAKLAND, CALIFORNIA, UNITED STATES, May 9, 2022 /EINPresswire.com/ -- Death Inc. is a dark comedy that focuses on the absurd social structures, laws, and religions that humans have invented. The show brings together sociological elements with Fantasy Realism, always chasing after what exists between the lines of humanity.

The story starts after a plane crash: two strangers (Jesse & Zoe) wake up dead in an unfinished afterlife that has been abandoned during construction. This place is a “waiting room” designed for people who died from unnatural causes, where everyone must have their death paperwork processed by the Corporation for Life, Death, and Boredom before continuing on to heaven.

Unfortunately, since the project was abandoned, no one is coming to take the citizens to their resting place. In learning this, Jesse sees a path forward to take the wasteland and make it a utopia, while Zoe wants to get back to Earth and spend time with her mother during the few remaining months she has left. Her mother is dying of cancer - a natural cause - and Zoe realizes that if she doesn’t escape, she will never see her mother again.

During this episode, the duo embark through this half-built afterlife, and slowly learn that they are not alone. They discover different districts and zones, each with separate laws of physics that dilate time or otherwise manipulate reality. The mystery grows when Zoe watches a video explaining what this place was meant to be, opening her eyes to just how dystopian their new home truly is.

Other characters include afterlife corporation employees who long ago abandoned their jobs (presented in flashbacks), human residents, and an inter-dimensional fax machine that holds the secrets of the universe.

About the creator: Evan Shwartz is an actor and producer from Oakland, California. He aims to not only perform, but also to support others by fueling the creative visions within the artistic community he holds so dearly. He has been active as an actor from age six through now (32) and trained at the Stella Adler Academy of Acting. Working full-time as the Post Production Manager at a small Berkeley studio, he swims in media day in and day out. Evan strongly believes that no achievement is obtained alone, and views his colleagues and teachers as integral to his soul as a creator and actor.

“Regarding the diversity of our cast and crew, all I can say is that it feels good to be working with my friends and neighbors. The Bay Area, and Oakland especially, is very diverse in all aspects. It’s one of the reasons I’ve stayed here so long and one of the reasons Death Inc. has been so great. The more varied a group’s background is, the more innovative and unique their creation will be. That’s true for entertainment, businesses, and communities as a whole.” - Evan Shwartz

“I can’t point to an exact moment when I came up with the idea, but I do know that it’s been part of me for several years. The first few years it was like having an idea stuck in my shoe that I could feel every time I took a step. Finally, during lockdown in 2020, I said ‘okay, this is the perfect moment to actually sit down and write something’, and that’s exactly what I did.” - Evan Shwartz

The Art of the project was created by the Mexican artist Arturo Chagala.

The Spanish-language version is in production with a launch date of July 15, 2022.