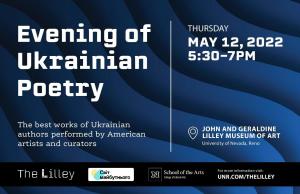 An evening of Ukrainian poetry

The Reno art community has been actively supporting Ukrainians and donating funds to the refugees fleeing Ukraine. I hope this event will further the local knowledge about the rich culture of Ukraine.”
— Vivian Zavataro, director of the John and Geraldine Lilley Museum of Art
NEW YORK, USA, May 11, 2022 /EINPresswire.com/ -- Thursday, 12 MAY 2022, 5:30-7 pm - Ukrainian poetry will be read in English by members of the art community with an introduction by Denis Belkevich.

This reading is a part of the series of events taking place in cultural institutions across the USA.

The Russian invasion of Ukraine, starting on February 24, 2022, has resulted not only in international support for Ukraine but also in increased interest in Ukrainian history and culture. In these unprecedented and turbulent times, professionals with Ukrainian roots living in the United States — curator and art manager Christina Steinbrecher-Pfandt, and art economist Denis Belkevich — organized a series of public readings of Ukrainian authors in museums around the country.

The first public readings will be held at the John and Geraldine Lilley Museum of Art (Reno, Nevada) on May 12, 2022, 5:30 — 7 pm. American artists and curators will perform works by the most known authors of Ukrainian poetry — Taras Shevchenko, Ivan Franko, Lesya Ukrainka, Mykola Khvylyovy, and works by contemporary authors including Lina Kostenko, Sergei Zhadan, and Oleg Teplykh in English. Barbara Walker, professor of Russian, Soviet, and Inner Eurasian history at the University of Nevada, Reno, will also give a brief presentation on Ukrainian history. Her research specialties include Russian and Soviet intellectual life and culture, the Cold War, and the histories of knowledge and expertise.

Vivian Zavataro, director of the John and Geraldine Lilley Museum of Art:
“The Reno art community has been actively supporting Ukrainians and donating funds to the refugees fleeing Ukraine. For instance, Artemesia Studios united Reno-based artists for a fundraiser for the people of Ukraine. I hope this event will further the local knowledge about the rich culture and art of Ukraine.”

Each evening will begin with a historical and cultural context of Ukrainian art - from the Scythian and Trypillya cultures to Ukrainian avant-garde and contemporary art, gradually shifting to Ukrainian literature. According to the organizers, the historical background will give a better understanding of the literary work. In the future, we plan to expand the list of authors.

“We will present work depending on the situation and specific location. For example, for the MoMA (New York Museum of Modern Art), the prose of Alexander Dovzhenko (whose film works are part of the museum's collection) will be an ideal fit. We also plan to read from the memoirs of other Ukrainian artists from the MoMA collection - Oleksandr Arkhipenko and Sonia Delaunay. Many American museums own works by our artists, which are often kept in storage. Our goal is to have these works on permanent display and present them to the world,” — Steinbrecher-Pfandt said.

During the public readings, we are planning to raise funds for the Ukrainian charitable foundation “World of Future” in Chernivtsi. Founded by psychologist and philanthropist Alla Zoria, the foundation has been actively working with humanitarian projects and organizations, such as UNICEF, the World Food Programme, and UNHCR since the beginning of the war.

CHRISTINA STEINBRECHER-PFAND
is a serial entrepreneur with German-Ukrainian roots. Christina brings more than 15 years of expertise in building art marketplaces to her role of co-founder and CEO at Blockchain.art (BCA). Blockchain.art (BCA) is a blockchain-supported marketplace and e-commerce solution for galleries, museums, and artists. As an experienced art manager, she has been managing international art fairs for 10 years before moving to the United States. She was the co-founder and executive director of the art fair Viennacontemporary from 2012 to 2018, raising over $12 million and securing the fair’s position in the top 10 must-visit art fairs on the global art market.

DENIS BELKEVICH
is the Co-founder and CEO of Art+Tech & NFT Accelerator Fuelarts and one of the leading Art Economists. Denis is a professional art manager, art economist, and art adviser, specializing in East European and Contemporary Asian art, digital assets, and Art Fund management. Denis created a series of educational courses in Museum Marketing, Art Banking as well as Artists' Career Management, and Asset Management. Denis leads the international promotion of Art Platform Cube.Moscow and serves on the Board of Directors of the International Association of Asian Art Collectors.

Denis is a regular participant in international conferences and forums on marketing and art economics (Communicating the Museum, Deloitte Art Finance, Art Business Conference, Art+Tech Summit by Christie's, etc.). He is frequently published in Ukrainian and international magazines. Denis teaches as a guest lecturer at Sotheby's Institute of Art and Parsons School of Design (New York) among other schools.

Vivian Zavataro
The John and Geraldine Lilley Museum of Art
+1 775-784-6659
vzavataro@unr.edu
Visit us on social media:
Facebook
Other