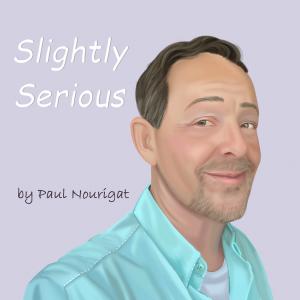 PORTLAND, OR, USA, May 11, 2022 /EINPresswire.com/ -- Nourigat’s aptly named LP, “Slightly Serious”, draws humorous and poignant images across ten original tracks, and will be released May 20th on all major platforms. Collaborating with talented instrumentalists from Austin to Italy, he fuses country, rock, and blues into a unique Americana vibe. The album delivers a range of melodic, toe- tapping, and foot-stomping arrangements, all bonded through his storytelling and vocals.

Nourigat exposes society’s foibles, from the nastiness of the online world to our addictions to the black mirror, (Couth and Truth, Toilet Texting), to our tendencies to moan - when we have so much to be grateful for (Pretty Fair Day). He mocks his late-life musical talents while encouraging people to take risks in “Debut at 62”, then reverts to deep soulful blues as he shares his thoughts about ladies’ shoes in “One More Pair”. Putting some funk into country- rock, “Pressing Snooze” speaks the cold hard truth about couch-potatoes, while “My True Loves” sweetly shows his approach to competing passions. “Consultancy” tells an inside-story about organizational reality, while “Imaginary Genius” mocks those among us who are just a little too special. “Mama Flipped Me Off This Morning” exposes the trauma that can come from irritating one’s spouse. Three music videos accompany the album and can be found on his YouTube channel, along with prior works.

The musician credits the style and storytelling of John Prine, Willie Nelson, and Jimmy Buffett, as Slightly Serious takes a decidedly less serious path than in his earlier Covid-inspired tracks found on “Shake Stuff Up” and “Open Up My Days”. With two new projects already planned for the coming 12 months, Nourigat will continue to tap into the growing portfolio of songs he’s written, 80 of which have not yet been published.