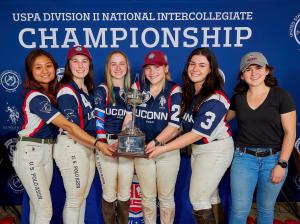 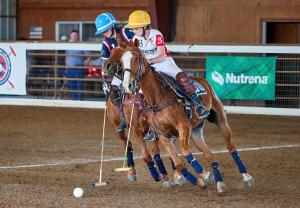 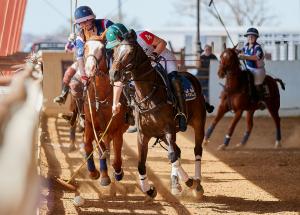 Both teams receiving a bye in the first round of play, UCONN edged out UC Davis in a narrow 8-7 semifinal win, while Texas Tech defeated Michigan State 12-9 to nab their spot in the championship final. A high scoring, back-and-forth first half, led to a Huskies takeover in the remaining two chukkers to secure the 15-11 win and the inaugural championship title for UCONN.

Leading scorer Leudesdorff shared UCONN’s game plan going into the finals, “Our strategy for the game was to stay composed and take each play as it came. Our main goal was to communicate and work together as a team. We wanted to stay collected and not let the score, whether it was in our favor or not, affect our playing.”

Making careful and conscious efforts to control the throw-ins while simultaneously igniting their offense from the start, UCONN’s Dalton, Koger and Leudesdorff combined forces for five unanswered goals in the first chukker to deny the home-turf Texans any scoring opportunities.

Dalton, who began playing five years ago at UCONN, discussed her team’s strong start, saying, “The first chukker’s success came from our team’s emphasis on having a good, strong start before the first whistle blew [...] we made sure to come out aggressive in the first lineup and win that right off the bat. We knew we had the strong side of our string of horses and wanted to capitalize off of that."

Hungry to get on the board, Texas Tech’s Mirsky and Harlan were able to re-energize the Red Raiders in the second chukker, with Mirsky scoring three from the field and Harlan scoring one from the field. Also ramping up their defensive strategy, the Red Raiders were able to keep the Huskies off the board entirely to bring Texas Tech within one goal of UCONN at halftime.

Koger spoke about UCONN’s second chukker troubles, explaining, “We realized we were not working as a team and and getting frustrated with one another. We needed to talk more, play off of each other, and communicate in order to come back and stay on top. We had to remember that we came here to win, we worked hard to be the best, and this was our chance to prove that. We could not let one scoreless chukker rattle us and keep us away from reaching our goals.”

Agreeing with Koger, Dalton added, “We went into halftime with a fresh mentality, the score was 0-0, everything started from scratch.”

Clearly recognizing a need for change if they wanted to win, UCONN completely revamped their game going into the second half. With a total of seven goals from the field off of Leudesdorff’s mallet, a stunning two-pointer from Koger, and the help of a pony goal, the Huskies were able to put an impressive 10 goals on the board between the third and fourth chukkers.

The Red Raiders attempted to keep pace, with Mirsky finding the goal three times, Ratliff adding to the board with two of her own, a Penalty 1 conversion and pony goal, but ultimately it wasn’t enough to overcome UCONN’s offensive prowess. As the final horn sounded, the Huskies led 15-11 over the Red Raiders to capture the very first Division II Women’s National Intercollegiate Championship title.

For many players like Texas Tech’s Harlan, this tournament, along with the creation of Division II polo, was one of the first opportunities to play at both an equally matched and competitive level. Harlan took time to note her gratitude for making it this far and being able to participate in the tournament. “I didn’t start playing until spring of 2020," Harlan said. . "I played one chukker at a prelim — This is the first time I’ve ever been able to compete! So I got to finish out my last season and it’s been amazing.”

All Intercollegiate and Interscholastic competition is played as arena polo. Games can be seen on-demand on Global Polo TV.

About the United States Polo Association®
The USPA was organized and exists for the purposes of promoting the game of polo, coordinating the activities of its Member Clubs and Registered Players, arranging and supervising polo tournaments, competitions and games, and providing rules, handicaps, and conditions for those tournaments, competitions, and games including the safety and welfare of participants and mounts. Founded in 1890, the USPA is the national governing body for the sport of polo. The USPA is currently comprised of more than 200 member clubs with thousands of individual members and oversees 40 national tournaments. For more information, please visit uspolo.org.