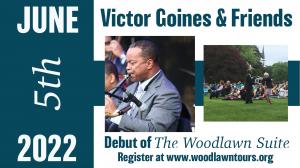 Victor Goines to Perform Live at The Woodlawn Cemetery

The idea of creating The Woodlawn Suite came after one of our jazz tours.”
— Meg Ventrudo, Executive Director of the Woodlawn Conservancy

BRONX, NY, USA, May 10, 2022 /EINPresswire.com/ -- Renowned composer and musician, Victor Goines, has been commissioned by he Woodlawn Conservancy to write and perform The Woodlawn Suite, a series of musical biographies that celebrate the lives and legacies of inspiring figures memorialized at The Woodlawn Cemetery. Goines is composing 12 movements to be performed by a full jazz orchestra on the Fairview Lawn of The Woodlawn Cemetery on June 5, 2022, beginning at 5:00 p.m, gates will open at 4:00 p.m. The concert will be free to the public, with pre-registration required, enabling jazz enthusiasts to gather on the grounds of a National Historic Landmark known internationally as the final resting place of Duke Ellington, Miles Davis, Lionel Hampton, Ornette Coleman, and Max Roach.

“The idea of creating the Woodlawn Suite came after one of our jazz tours, where we included the portrait compositions by Ellington with Woodlawn connections: Bert Williams, Florence Mills, and Coleman Hawkins. Immediately Victor Goines was selected to compose the suite as his Victor Goines and Friends concerts at Woodlawn are among our most popular programs,” said Meg Ventrudo, Executive Director of the Woodlawn Conservancy.

Goines made the decision to create musical vignettes inspired by the historical figures that impressed him. Known for his compositions and arrangements associated with the Jazz Age and Harlem Renaissance, the first piece he wrote was a tribute to Madam C.J. Walker. “She was a black woman who owned a factory, and a fabulous car at the dawn of the 20th century. My goal was to craft a tune that captured her confidence and swagger.”

The piece debuted on the Conservancy’s Tuesday Night Club, hosted by Walker’s great-great-granddaughter, A’Lelia Bundles. Bundles and Goines have shared two additional compositions via zoom, Miss Tyson, and the Red Cap Porters. The Tyson composition is a moving dialogue between Cicely Tyson and Miles Davis, featuring saxophone and trumpet. Inspired by Eric Washington’s award-winning book, Boss of the Grips, Goines was able to produce the sounds of the hustle and bustle of Grand Central Terminal.

With over 300,000 stories at rest within Woodlawn’s 200 acres, Goines is struggling to make the final selections. “I’m currently working on tributes to those who were lost on the Titanic and the musicians from Tin Pan Alley. It’s a challenge to produce stories through sound, but with a full orchestra performing the movements we’ll be able to accomplish the task,” said Goines.

The Woodlawn Conservancy is the 501 (c) (3) support organization for The Woodlawn Cemetery, dedicated to preserving and interpreting the historic site through educational programming.

Victor Goines has been a member of the Jazz at Lincoln Center Orchestra (saxophone & clarinet) since 1993 and currently serves as the Director of Jazz Studies at Northwestern University. His commissions include: Untamed Elegance 2016-Jazz at Lincoln Center, Suite for Bird 2014-Music Institute of Chicago, Benny: Then, Now, Forever 2009-Louis Armstrong Foundation/ASCAP and others.

While there is no admittance charge for the concert, registration is required by visiting: www.woodlawntours.org