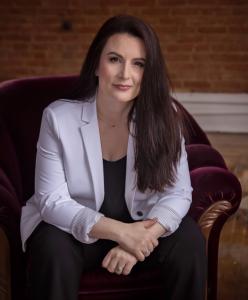 This move is a natural next step in my advocacy for survivors of sexual abuse. I’ve admired everything Jamie has been doing, and to be working side by side with him is an exciting opportunity.”
— Debra Martinez
LANSING, MI, USA, May 2, 2022 /EINPresswire.com/ -- To up the ante in the firm’s aggressive representation of victims of sexual assault and abuse, White Law PLLC has added as an Associate Debra Martinez, a former SVU prosecutor, Title IX Coordinator, and Director of Michigan State University’s Office of Institutional Equity.

“I’m extremely pleased to have such an extraordinary advocate join our fight to hold institutions accountable,” White said. “During her many years fighting these battles, Debra has demonstrated an unparalleled ability to understand and aid these victims and to clear all hurdles to prosecuting their abusers.”

As an Ingham County Assistant Prosecutor, Martinez served as unit chief of the Special Victim Unit and as an assistant prosecuting attorney from 2011 to 2015, with a focus on sexual assault crimes and crimes against children. Some of her notable prosecutions include:

- Lawrence Gibbs, sentenced to 25 to 50 years for multiple sexual assaults of young boys

- Melissa Mitin, sentenced to 27 to 40 years for murdering her two infants.


While at MSU, Martinez was named an “Outstanding Supervisor” for her positive leadership style, and praised for creating a working environment that valued staff and brought in diverse perspectives.

“I feel like this move is a natural next step in my work as an advocate for survivors of sexual abuse, discrimination, and harassment,” Martinez said. “I’ve long admired everything Jamie has been doing, and now to be working side by side with him is such an exciting opportunity.”

Martinez earned her J.D. from Michigan State University College of Law, and has a B.S. in Sociology with an emphasis in Criminal and Social Justice from Central Michigan University.


###
Attorney H. James White has represented many sexual abuse survivors in litigation against the institutions that allowed it to occur, including clergy abuse survivors and victims of USA Gymnastics' disgraced doctor, Larry Nassar. Because of this work, White is among Law 360’s “Titans of the Bar.”